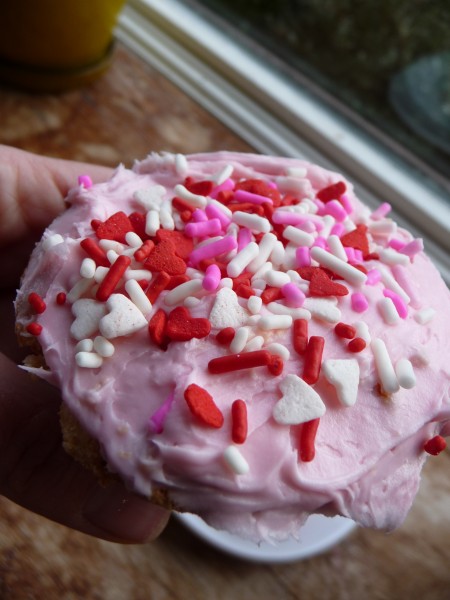 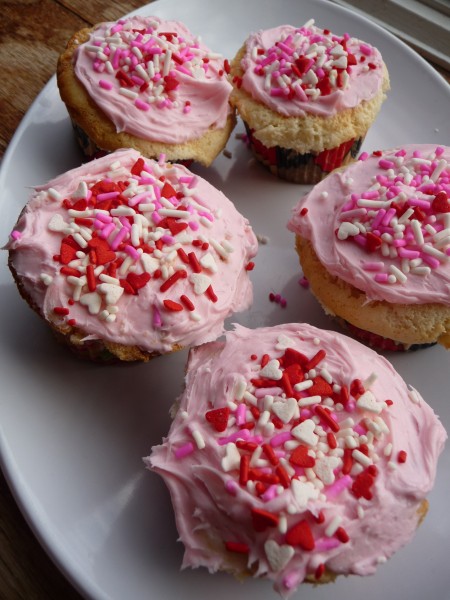 If there’s one occasion that seems to call for cupcakes, it has to be Valentine’s Day. Combine chocolate with cupcakes and you have me half way to the boudoir. But this year the fam and I will actually be in Vermont for February 14th, which isn’t such a bad place to be on the most romantic of greeting card generated holidays (Moonlight in Vermont…). The forecast is for cold, really cold, temperatures, so there will be snuggling, and heated outdoor pools, and hot chocolate. And also two children in tow so this getaway will be as romantic as a Disney movie starring Dick Van Dyke (this isn’t France, there will not be any topless family hot tubing).

I’m looking forward to the slopes and snow and hearts on the mountain, but because we won’t be home I won’t have a chance to make anything sweet for my sweets. So instead I made a batch of Valentine’s Day cupcakes the other day just so we could have them a little early. My new favorite cupcake recipe is from Thomas Keller’s Ad Hoc At Home cookbook. Most people might not think of the chef behind fine dining temples French Laundry and Per Se as being a master at sweets…but he is. I’m telling you that his chocolate chip cookie, brownie, and cupcake recipes are the only ones I use because they are THE BEST. 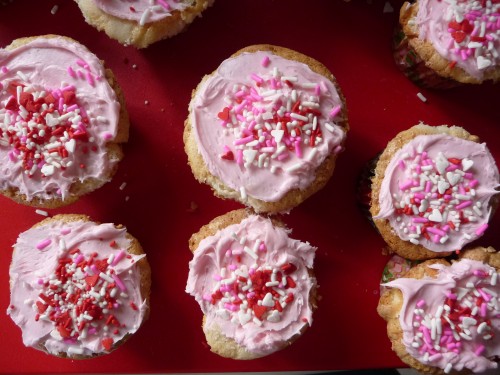 Keller’s versions of these classics are not (somewhat surprisingly) at all tricky, nor do they require extra time or technique, they just have the one or two steps that make a big difference. As an example, Keller is big on whipping egg whites separately and then folding them into the batter, something I am also big on for things like pancakes. Good quality vanilla is also very important.

I did not make his frosting though because for some reason I’m never really happy with buttercream frosting that I make myself. For banana cupcakes I will make a cream cheese frosting from scratch, but in this case I thought it would be too heavy and tart. Instead I cheated, and did something I never do: I bought some pink frosting in a can. I did. And it was good. I don’t feel bad at all. If you find yourself having to make a lot of cupcakes for a school party or some such thing then save yourself a little time and go the make-it-yourself cake/by-the-frosting route. It’s fine.

For decorating I used two different kinds of sprinkles and then that’s it. Very pretty, very light, and time left over for hot tubing.

One Response to Cheating on Valentine’s Day