Chicken and Carrots: Perfect Together 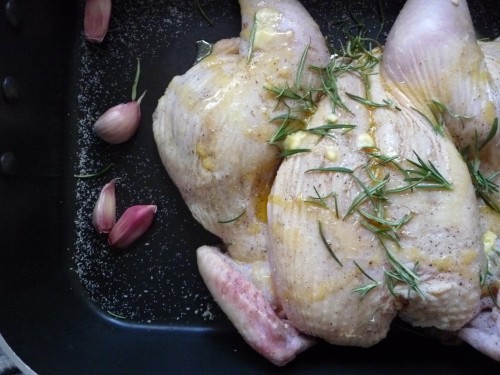 I like to roast a chicken once a week. Sometimes I roast two chickens at once (same amount of work, twice as many leftovers for soup, salad, and sandwiches), but having a roasted chicken on the counter, all golden and fragrant of butter, garlic, and herbs, is one of the best gifts you can give yourself. And although I have my one standard way of roasting a bird, I do like to experiment with its co-stars. So to start, here’s my standard roasting technique:

1. Rub the whole raw chicken all over with salt in the morning and then put back in the fridge (on a platter covered with plastic wrap or in a giant Ziploc) until you’re ready to make dinner.

2. Always bring chicken to room temperature before roasting, so about an hour before you start cooking and preheating the oven take it out of the fridge.

3. Cut out the backbone of the chicken with some kitchen shears (this is on the opposite side than the breasts and you will need to make two cuts, up one side and then the other of the back bone to remove it; this is actually not hard but the butcher at the supermarket will also do it for you if you ask nicely) then press it flat to make it cook a bit faster.

4. Before roasting the chicken rub it all over with melted butter or olive oil, put herbs like rosemary and thyme sprigs on top and inside, season with salt and pepper, throw several garlic cloves into the pan with the papery skins still on so you can squirt out the garlic after roasting and spread it on the chicken or on a piece of toast or just directly into your mouth.

5. Roast chicken at 450 (remember to preheat it) for 20 minutes, then open the oven, pour a 1/3 cup of white wine on top of the chicken, lower heat to 400, and roast for another 15 minutes or so, until juices run clear and a thermometer inserted reads 165. 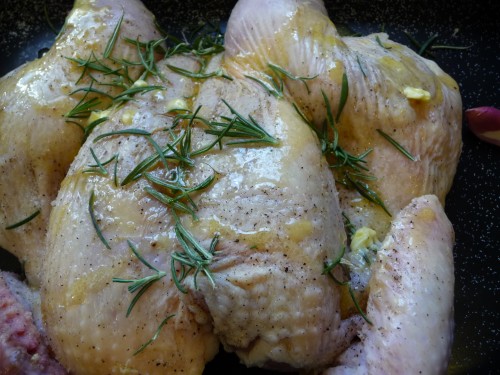 So that’s my normal procedure–give or take an herb or more or less cooking time–but what I like to mix up is what I put underneath it.

Now, if you’re a gravy lover (and really, who isn’t?) then making a bed of vegetables and tubers under the bird might seem like a perfectly good waste of meat juices and bits. But the advantage to sacrificing the gravy is not only do you create a very flavorful second dish while cooking just one, but it might arguably be the most delicious way to prepare a vegetable. Case in point, carrots: 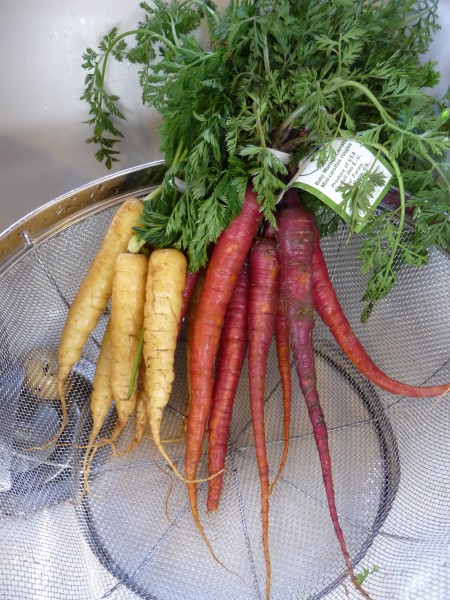 I found these beauties at the supermarket–I didn’t even question why there were heirloom carrots in the store in February (are they black market? who cares!), I just bought them. If you are going to roast carrots the there are two things to keep in mind:

1. Roast a lot of carrots and try and use whole carrots or even better the ones that still have the greens on (never, never, baby carrots), not only because they shrink up during the roasting but because they taste so intensely good in their concentrated carroty form that you might eat them all before they even make it out of the roasting pan.

2. And if you have a little extra time, parboil them first. Just like roasting potatoes, the parboiling does something magical by breaking down the starch. Just scrub them or peel, put into a large pot of boiling water, cook at a rapid simmer until you can pierce a carrot with the point of a knife but not until they’re mushy or breaking apart–about 3-5 minutes. Drain in a colander, dry by tossing them a bit in the colander, then get them ready to roast. 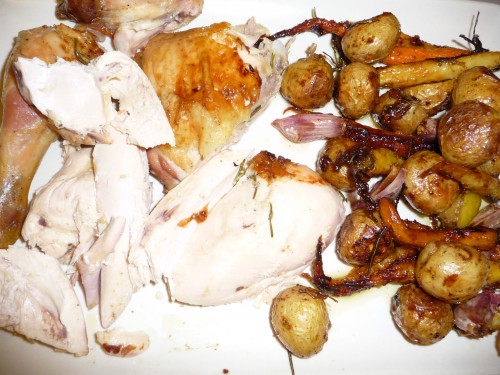 2 Responses to Chicken and Carrots: Perfect Together