Eating Myself Into a New Decade 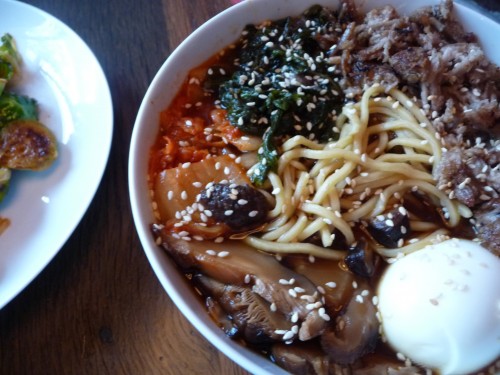 I can’t believe I’m admitting this, but last week I turned…40. Where my thirties went to, I honestly don’t know, but here I am, in a new decade. Growing up, I remember my dad always saying “I’ll be 39 forever,” and this never made sense to me as a kid (in the same way that other adult things like Barney Miller, water crackers, perms, and Reader’s Digest also didn’t make sense to me), but now it totally does. In my mind I really am still 39. Forever.

The reasonable part of my brain reminds the other, much more defiant and unreasonable part, that I should embrace this venture into a new decade. How lucky that you made it this far! Think of all the cool things left to come! And I try and soak up some of the sage advice I’ve been given or stumbled upon:

“Age is just a number”–my (much younger) yoga teacher.

“My life just started being awesome five years ago.”–said by #1 lady crush Connie Britton, aka Tami Taylor, aka Rayna James, at the age of 45.

“Mommy you look about 25 to me.”–said by a six year old boy who is also related to me…and depends on me for his care and feeding.

“Haha–we’ve been waiting for you…” said with a hint of menace by friends already slumming it in their forties.

“What I wouldn’t do to feel the firm-ass of a 48 year old again”–spoken by Fred Willard on a recent episode on Modern Family.

“Your forties are awesome, I swear”–said the day before my actual birthday (but after many bourbon cocktails), by a complete stranger I met in Charleston, SC.

The one thing I did ask for on my birthday, is a trip to a place where I had never been before, a place that was all about the food and where I could still get back home to the kids in about two hours ifÂ  there was an emergency or the dog ran away. So Tim took me for a gluttonous birthday mini-holiday to Charleston. We bumped into the aforementionedÂ  lovely stranger and her husband one afternoon at a bar (day-drinking is allowed on a birthday mini-holiday) and like five hours later we were embracing and telling each other how beautiful the other one was (do you know that scene from the movie Bridesmaids when Becca and Rita are sitting the in the back row of the plane after drinking a few 7 and 7s? Well, it was like that.)

Besides providing us with lovely couples to spend the afternoon with, Charleston did not disappoint with its beauty or in the food department. 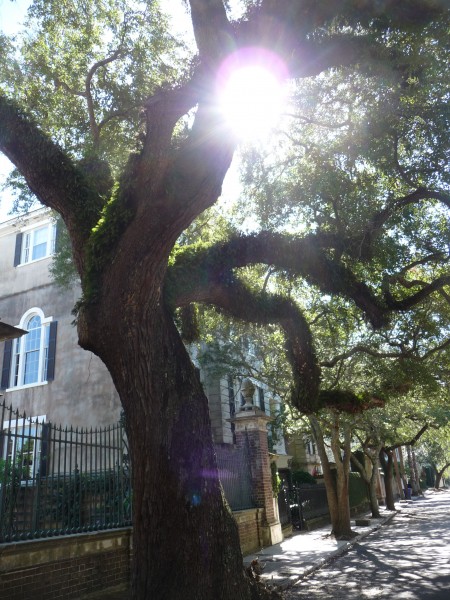 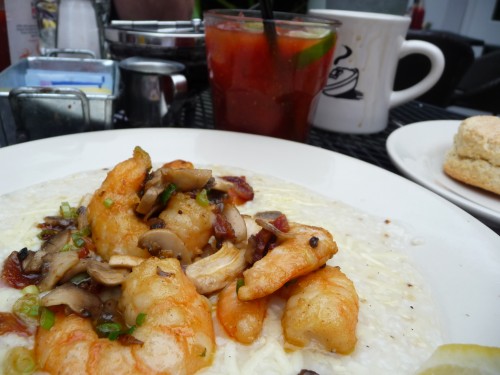 I’m happy to share with you all that we ate and drank, but if you are looking for any traditional and touristy tidbits, I can tell you that we walked a hundred miles, consumed a dozen bloody marys, but did not do a single, solitary, educational thing on our trip. We did make it to the building where you catch a ferry to Fort Sumter, but while waiting in a line with several septuagenarian couples in sensible shoes and sun visors, I said to myself, “I’m not that old…yet.” So we hightailed it out of there, stopped at a bar, and found that amazing couple who spent the afternoon buying us drinks.Â  Like this one: 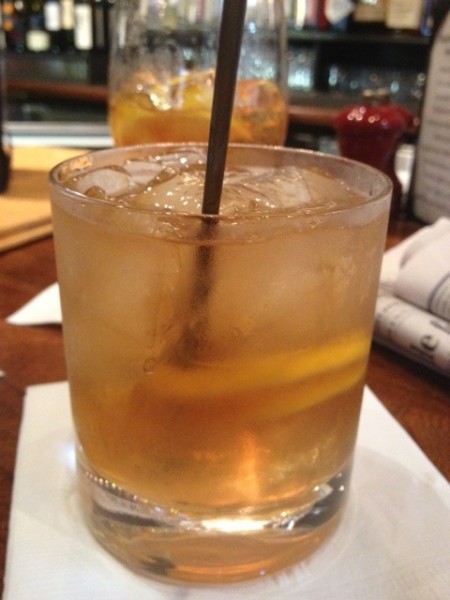 So where did we eat. My lord, everywhere (and apologies for photos that are not completely crisp and clear–the lens was probably stained with mimosas and pork juices). Above are the shrimp and grits I had for breakfast at the must-stop Hominy Grill (see the bloody mary in the back ground?). I liked Hominy so much we went twice, once for breakfast, where I had the shrimp and grits and Tim had a sausage and biscuit thing (I’m still disappointed that we didn’t order the Big Nasty: A biscuit topped with a piece of fried chicken and gravy); then a couple of days later for lunch, because the waitresses told me I had to get the fried tomato BLTâ€”worth it. 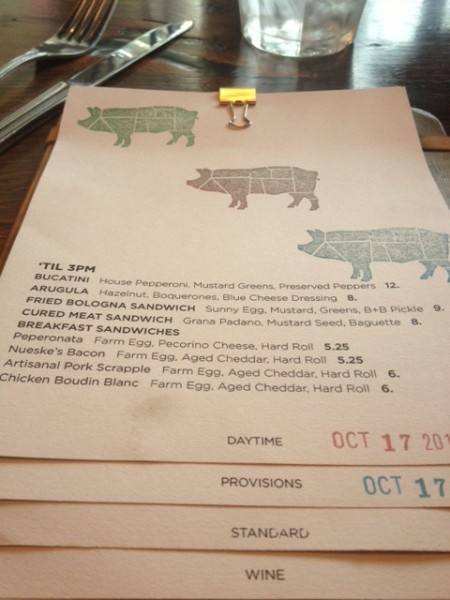 Two Boroughs is located in a non-toursity, sleepy-hipster neighborhood, on the far side of the Charleston College campus. Alongside the restaurant is a small shop, “the larder”, which sells local products and ingredients.Â  It might seem odd to order ramen soup at a low-country food establishment, but it’s their specialty and I adore homemade ramen noodles, so I ordered it with “the works” (again, because the waitress told me to, you have to listen to the waitress): Topped with housemade kimchi, shredded pork, mustard greens, roasted mushrooms, and an egg. And also a side of roasted brussel sprouts (how excited are you that it’s brussel sprouts season?). 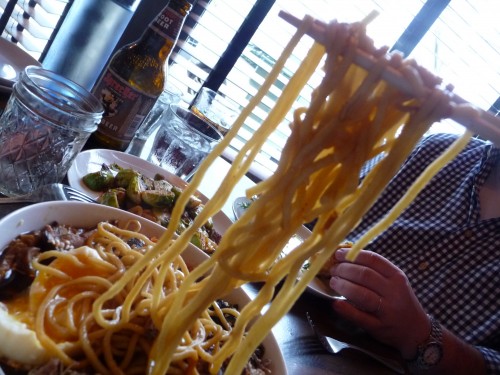 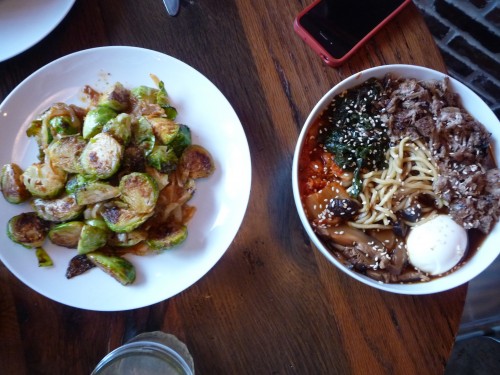 And then there was the egg and fried bologna sandwich. I made Tim order this so that I could try it, and then we pretty much fought over it the rest of the meal. When you think “bologna” you are probably imagining the pink floppy disc that’s cryovaced inside of a yellow package, but this was not that… 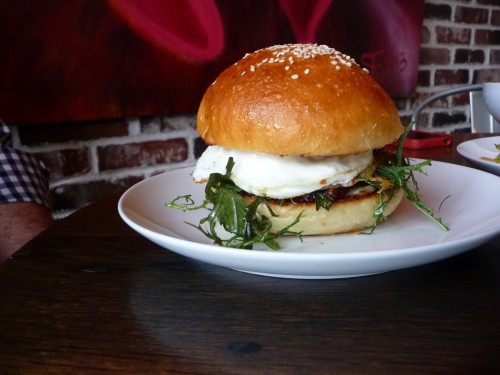 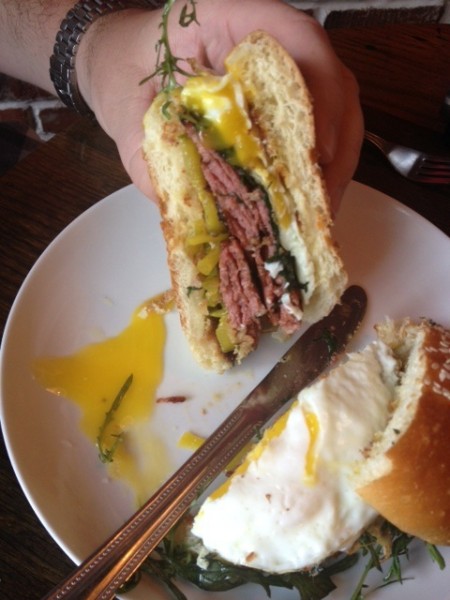 It was crumbly, meaty, spicy–like pate and sausage had a baby. Then we finished the meal with this wee budino topped with pistachios–perfection. 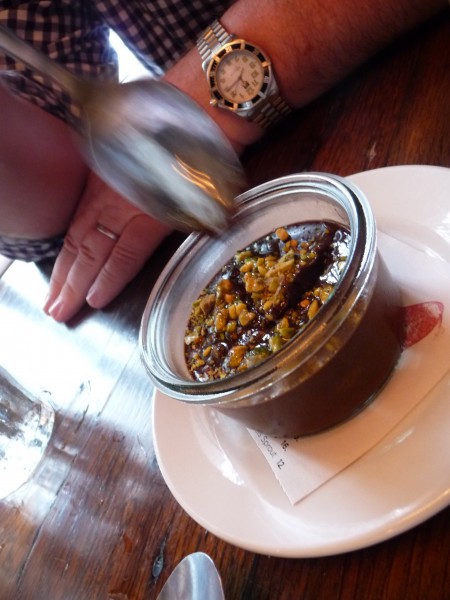 Then there was Husk, which is located inside of a beautiful old Charleston house and is arguably the town’s most celebrated restaurant.Â  I loved Husk, not only because they wrote”Happy Birthday!” on my menu, but because they introduced me to the joy that is pig’s ears. Now, I ‘m not trying to sound macho by waxing on about how delicious pig ears are (get it?), but this dish was probably the best thing I’ve ever eaten (and apologies again for the quality of this photo): 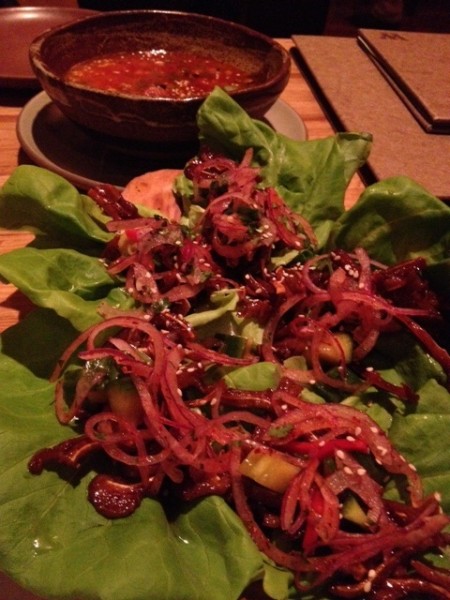 On the menu they are called: Kentuckyaki Glazed Pig’s Ear Lettuce Wraps with Salt “Fermented” Cucumbers and Peppers, Cilantro. They were a marvel. Crunchy, sweet, salty, vinegary…all of my favorite things tucked inside of a lettuce leaf. I would go back to Charleston (or Nashville, there’s a Husk there too) just to eat this dish again.

And for my actualÂ  birthday dinner we went to the restaurant that many people told me we HAD to go to–The Ordinary. Located in a old bank building, it is a lively, grand, special-occasion-feeling place, with a terrific menu of fish and oysters. All I can tell you is that after a couple of daiquiris at the bar, we sat down and proceeded to order the triple seafood tower, the biggest one on the menu, and we at it ALL. 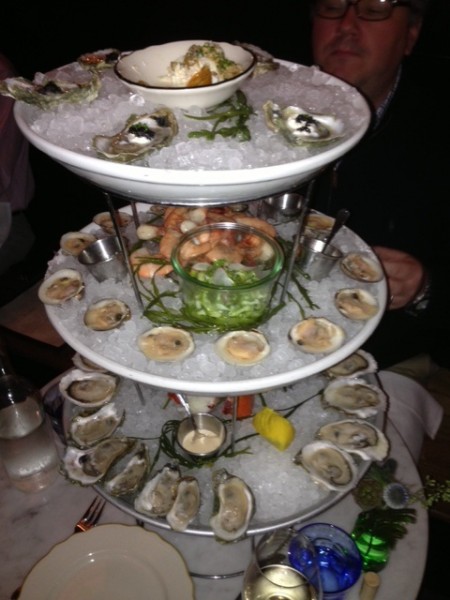 An older gentleman a few tables down from us actually raised his glass to Tim when it arrived at our table, a gesture that was very “kudos to you, sir”. There were raw oysters, Littleneck clams, razor clams, South Carolina peel ‘n eat shrimp, Peekytoe Crab Louie…it went on and on. We also ate fried oysters with beef tartare. It was a glorious if not gluttonous display of crustacean consumption.

We ended our evening at a great bar across the street called The Belmont, where we ran into another group of vacationers from Tulsa, who had literally been at all the same places as us at the same time–they were like our food doppelgangers–so we drank with them and had a wonderful time.

One other terrific establishment which I have failed to mention because I took no photos there was: The Grocery, which is known for its brunch (fried quail over french toast) and pickled vegetable plate (we had both), and where we met a lovely waiter named Walter, who gave us a lot of wonderful recommendations for the rest of our trip. Thanks Walt.

And thank you Charleston for making the bumpy entry into my forties a little more palatable. I can’t wait to go back and skip the fort.