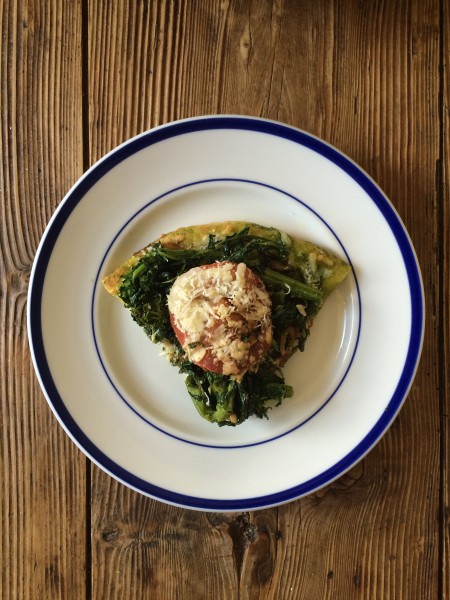 So I’m going to admit something here, and it’s not like it’s any kind of big deal, but it might come as a surprise to those of you who assume food writers make positively everything from scratch…My family has acquired an addiction to frozen pizza, and we are not ashamed.

It started when I brought home a box of Amy’s organic frozen margherita pizza (and I want to emphasize here that this is NOT a product placement, I have never met Amy, nor has she ever sent me free pizza…at least not yet). I picked it up at the supermarket because I think I was going to be out of the house for a few nights and I thought it would be good to have something healthful and easy in the freezer that Tim (who, I may have mentioned before, does not boil water) could make for him and the kids. Normally they could just pick up a pie from our neighborhood place, but truth be told, our local pizza is no great shakes, and I was intrigued by the organic-healthfulness of the Amy’s pizza. I think my internal dialogue went something like this:

“This pizza doesn’t look half bad.”

“It’s kind of pricey for such a small pizza, don’t you think?”

“Yeah, but the ingredients are all recognizable and pronouncable!”

“But I could just go home, make some dough, defrost that sauce I made that’s in the freezer, get the good mozzarella…”

“Stop being such a snob! Not everything has to be D.I.Y. Can’t you try and embrace the frozen food aisle for once? You can always go back to making your own dough when you have the time.”

So I bought the pizza, brought it home, and our household has not been the same since. Tim and the kids flipped for the thing. Delightful! So tasty! Best ever! They asked if I could stock the freezer with more, MORE!

I have to admit, on our “crazy” nightâ€”which is the night where play rehearsal-lacrosse practice-swim clinic-ballet-visit to the orthodontistâ€”all seem to collide, this pizza has become a savior. There’s just something kind of delightful about these little frozen pizzas, they really do taste good. Plus, I have taken to doctoring them so that they feel even more like a meal. Typically I will top one of the pizzas with any and all of the following:

A handful of arugula tossed in vinaigrette.

A drizzle of good balsamic vinegar.

Perhaps it’s the additional ingredients, that personal touch, which allows me to finally embrace the frozen pizza as a worthy weeknight meal-from scratch alternative. Also, there’s the ease: They’re cooked in like 10 minutes (not including pre-heating the oven), and are a nice vehicle for finishing off whatever leftovers or odds-and-ends are in the fridge. It even allows us extra time to bond and relax with one another because I’m not racing home to start a meal or cooking when I could be helping with homework or the million other things that need to be done. We’ve also added one other formally-a-no-no-perk: The kids set the table in front of the tv so we can eat our pizza in front of Dancing With the Stars (yes, another one of my family’s guilty pleasures). This new routine has become something we all look forward to, and I may argue, has become as much of a quality bonding activity as assembling around the dinner table to eat chicken and dissect our day. Don’t get me wrong. Eating a homemade meal is also something we do on most weeknights and it’s very worthwhile. But if it wasn’t for frozen pizza and DWTS, we wouldn’t have known that Conor can do a truly hilarious imitation of Patti Labelle dancing the cha-cha.

So here’s to you, frozen pizza, and you, Amy, whoever you are…you’ve reminded me that a quality shared meal can come in many forms, and that it’s OK to shake-off the pressure that I (and I think many) parents feel to make each and every single meal totally from scratch. I love that labor of love, I really do, but I also love watching C-list celebrities dressed in sequins attempt the fox trot. I really do.