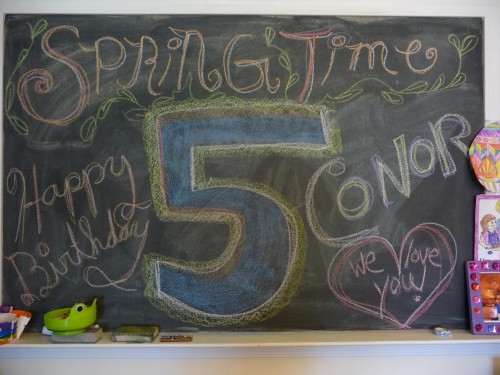 On Monday, my baby boy turned 5 (yes, I called him baby boy, and when he’s a 50 year old man I’m still going to call him that). I decided to throw Conor a small party and just invite his preschool class to come over after school. Last year, we did his party at a bouncy-trampoline party place, and although it made my life easier to just book it, show up, pay someone to throw the kids in a ball pit, and call it day, I kind of missed the personal touch of an old fashioned kid party at home. And I figured if the weather held out, I could keep the brood outdoors. This is important because, for those of you who have never been around a large group of 5 year old boys, they are like a pack of wild animals with their jackets hanging off. If you have been around this particular male age group you will know that they are prone to spilling, flash sobbing, breaking things of value, tackling, chasing each other with pointy sticks, and saying things like “I’m going to smack your booty”. I just don’t need that in my house. So outdoors we stayed for a breezy yet sunny hour and a half of kickball, chaotic freeze tag, t-shirt decorating, violent pinata thumping, duck-duck-goose, and of course

One Response to How To Turn 5