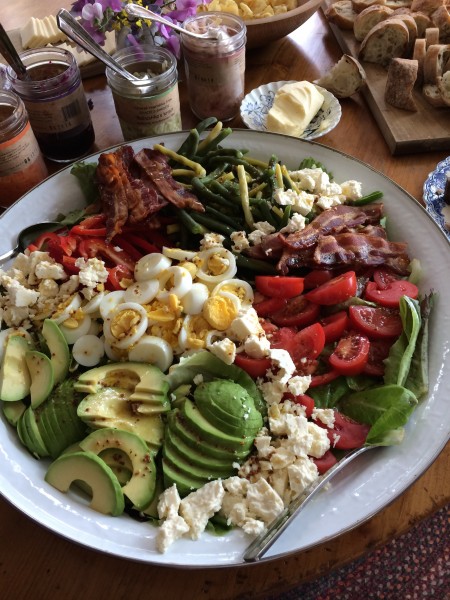 One of my favorite Maine traditions is when my college roommate comes to visit us with her family. Ali and I met as freshman at Middlebury College and our bond was forged those many years ago during orientation, which was conducted amidst the Green Mountains of rural Vermont. After a forced hike (which I wore white Keds for) we perched on a rock and watched our fellow first years leap off a cliff into a swimming hole the size of a washcloth. It was at this point that one of us looked at the other and said something along the lines of, “what are we doing here?”. Ali was from Bay Ridge, I was from Jersey; neither of us owned a flannel shirt, the campus was swathed in it;Â  we listened to Prince, our hall mates blasted Spin Doctors. We were a match made in liberal arts heaven (and yes, by the second semester we owned as much flannel as everybody else).

Lucky for me, Ali and her husband Trevor settled down in Maine, so we get to see each other every summer. As our families have grown, so has our lunch, which is usually served buffet style after hours of swimming, digging, running, and soccer-playing. The advantage of the kids being a little older now is that we don’t have to hover over them as they sprint for the dock, and can instead enjoy each others’ company. I also like that it means we can focus on making a lunch that’s appealing to all ages, as opposed to slicing grapes in half and cutting crusts off of grilled cheese.

This year we combined forces and made a mega salad, my version of a Maine Nicoise.Â  We supplemented the salad with several loves of good crusty bread,Â  jars of locally fermented vegetables from Gracie’s Garden, seared tuna, and a bottle(s) of chilled rosÃ© (see comment above about not having to hover over your children anymore). By preparing this as a composed salad, the nicoise not only looked gorgeous, but also had the benefit of letting everyone take more or less of what they like (more avocado for one kid, no egg for the adverse, etc.). It’s summer cottage cooking at its finest. 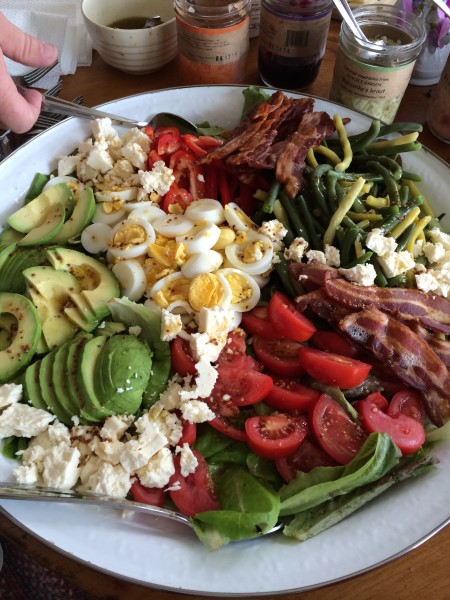 So here is what to put in your Mega-Maine-Nicoise:

On the bottom of a large platter make a layer of butter leaf lettuce (or whatever lettuce you prefer, maybe not arugula though). On top of the lettuce place the following in segments: 6 sliced medium-boiled eggs, 4 large sliced tomatoes (you can use 2 pints of sungold or cherry tomatoes if you have those instead), several strips of crisp bacon (I prefer to cook a whole package of center cut bacon in the oven when making enough for a crowd), 2-3 sliced avocados, crumbled feta, a big bunch of blanched or steamed string beans, and 1-2 sliced red peppers. Sprinkle everything with flaky salt and freshly ground pepper. You can then either drizzle the entire salad with a vinaigrette or serve the dressing on the side. For the dressing I combined: 1 part red wine vinegar (sherry or white wine is fine too), 1 part grapeseed oil, 1 part olive or walnut oil, spoonful of maple syrup, spoonful of dijon, 1 small finely chopped shallot, salt and pepper. *I served the seared tuna on the side so that those who want it, don’t have to fish for it in the salad.