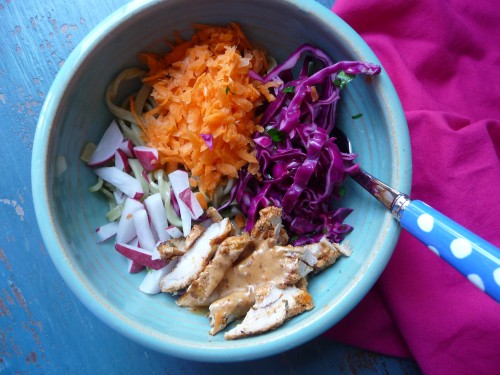 Have you ever had the experience where something you’ve never heard of is introduced to youâ€”perhaps by a hipper-than-you friend or know-it-all babysitterâ€”and then suddenly, from that time forward, you start hearing about said person, place, or thing ALL of the time? Say, for example, these four things: Ruzzle, Boo, Cara Delevingne, Gruner Veltliner. Never heard of them? Now you will… constantly.

I never know if this trend-alert is just another example of aÂ  Gladwellian tipping point? Or is it just cosmic kismet? The possibility that we are all latching onto something at the exact same time so it becomes part of the universal cultural currency.Â  Maybe it’s along the lines of how certain baby names become popular at the same time (Conor has three friends names Aiden…coincidence that their moms grew up in in the Sex and the City era?).

In the food world, I find that this happens all of the time. You latch onto an ingredient, dish, or cuisine that seems new (at least to you) and then suddenly you’re seeing it everywhere. Case in point: cold Asian noodle salads. I’ve already posted about my delight with warm Asian noodle dishes, but now, as we’re in the midst of yet another early-season heat wave, I’m transitioning to cold. With the exception of the classic sesame noodle salad (I always liked Mark Bittman’s version) I never really gave the concept much thought, until a friend of mine brought me to the Korean supermarket chain H Mart, and a whole new world of Asian noodle varieties opened up in front of my eyes: fresh varieties and dry, buckwheat and sweet potato, stick and glass–where had they been all of my life?

I started stocking my fridge with every kind and experimenting by making noodle salads. The fresh noodles cook so quicklyâ€”3-4 minute-that I frequently make them for lunch: boil, strain, rinse in cold water, then drizzle with a sauce made with soy sauce, a little sesame oil, a knob of grated ginger, a squeeze of lime juice, and maybe a finely chopped chile (if I’m making a bit batch and storing them in the fridge for later, then I will toss them with this simple sauce first to prevent the noodles from sticking and also because they will absorb all the flavors).

From there I like making a raw vegetable slaw to toss in. I shred or thinly slice or peel any and all of the following ingredient-red cabbage, radish, carrot, asparagus, cucumber, cornâ€”and then combine them with with salt, pepper, rice vinegar and chopped parsley or cilantro.

If a slaw is more work then I feel like doing, then I’ll just reach into the fridge for a handful of arugula, or chop a hopefully ripe-enough avocado, slice a hard-boiled egg (because when you boil oneÂ  you might as well boil a few and keep the extra for later), or use the remaining pieces of a leftover chicken.

And of course, as soon as I jumped on thisÂ  noodle train, I started seeing Asian noodle salad recipes and stories everywhere. One article named it a trend of the future, Bon Appetit magazine has a story devoted to it in this month’s issue, and at a BBQ party I attended a couple of weeks ago someone combined cold ramen noodles (like the kind you steeped with boiling water in your dorm room) with a traditional green cabbage coleslaw and it was completely eye-opening and delicious.

I’ve been meaning to trace the origins of this new insurgent noodle movement but until then I’m going to keep using this perfect summer ingredient. My favorite variety at the moment areÂ  fresh Korean green tea noodles… 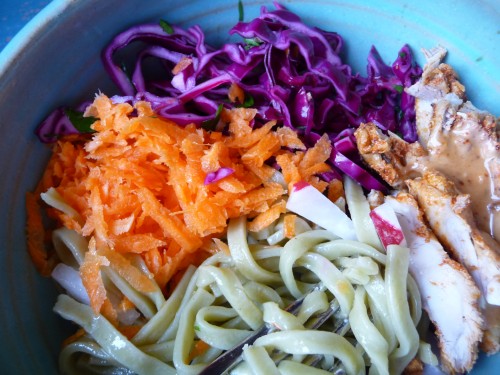 Whomever thought of making noodles with green tea was a crazy genius–springy, light, completely tasty. For the bowl above I sprinkled the noodles with a little soy sauce, lime juice, and walnut oil before tossing, then topped it with shredded carrots, red cabbage and sliced radish that I had tossed with parsley, salt, pepper, and rice vinegar. I added a few pieces of leftover chicken thighs from the night before and a spoonful of miso mayo for kicks. I recommend making the the noodles in the morning, chilling them in the fridge (remembering to toss them with a drizzle of sesame oil so they don’t stick together) and add them to whatever you’d like when you get home.

So be prepared to hear about cold Asian noodle salads wherever you go and start making them…it’s kismet.