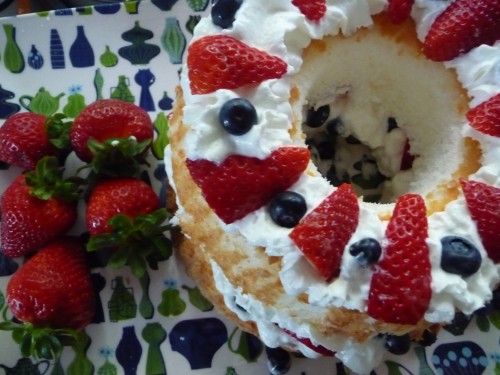 With the 4th of July holiday almost here, I wanted to share a dessert I made a couple of weeks ago for Conor’s T-ball picnic. Now, I’ve learned the hard way that some potlucks (aka “meal of tears”)â€”typically ones that are organized in conjunction with an amateur sporting event or an elementary school partyâ€”are not the time to show off your favorite homemade dish.

My first lesson was when I spent an entire day making several batches of deviled chicken legs for a back-to-school potluck at P.S. 183. After I proudly placed my platterâ€”piled high with tasty, crispy poultryâ€”on the gymnasium table, I stepped back so as to avoid the throngs that would surely descend gratefully on my dish. Instead, I watched a mom come by and plunk an extra large bucket of KFC friend chicken right next to my platter, tossing some containers of cole slaw in its orbit. Done and done.

You would think I had learned better from being bested by the Colonel, but I refused to give up my desire (misguided need) to prepare homemade food for the masses (receive validation wherever possible). My next attempt was a holiday party in Belle’s first grade classroom. I stayed up most of the night making pumpkin cupcakes from scratch topped with cream cheese frosting. The next day, when I delivered my treats to the party, I placed them proudly on the goody table, only to be usurped by a box of Entenmann’s mini-chocolate donuts (Damn you, Entenmann’s! I cannot compete.).

Finally, last year’s t-ball picnic. Our team was assigned salads and I thought: I could just shred some lettuce and toss in a few cherry tomatoes, or I could spend an entire afternoon crafting a composed salad consisting of 10 different vegetables all carefully peeled, sliced and shredded. That’s what I’ll do! 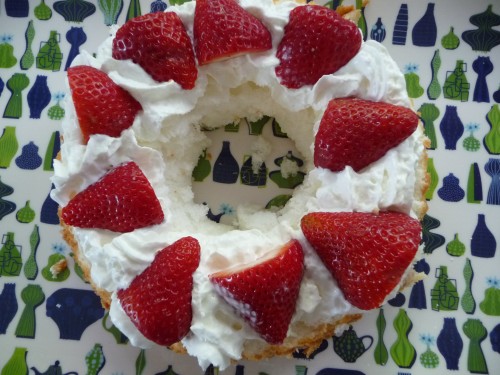 Needless to say, I have finally learned my lesson: When it comes to events where there’s a very strong likelihood that your food will end up next to a bucket of KFC, put away the big guns. Case in point, this dessert inspired by a cover of Martha Stewart Livingâ€” a store bought angel food cake split in half and layered with strawberries, blueberries, and whipped cream.

It is the easiest thing in the world to make but the over the top presentation gives it a certain “wow” factor. Basically you split an angel food cake in half horizontally (if you are particularly deft you can cut the cake into thirds to have even more layers).

Place a layer of whipped cream in a ring on the bottom layer and then top the cream with berries (if the call of homemade is too loud to ignore, then you can mix the berries with a bit of lemon juice and honey beforehand). Add another ring of whipped cream on top of the berry layer and then place the top half of the cake carefully on top.

Add another ring of whipped cream to the top of the cake and then decorate with the remaining berries (again, if you want to spruce it up, shave some chocolate on top as well). Belle noticed that the berries on top looked a bit like faces… 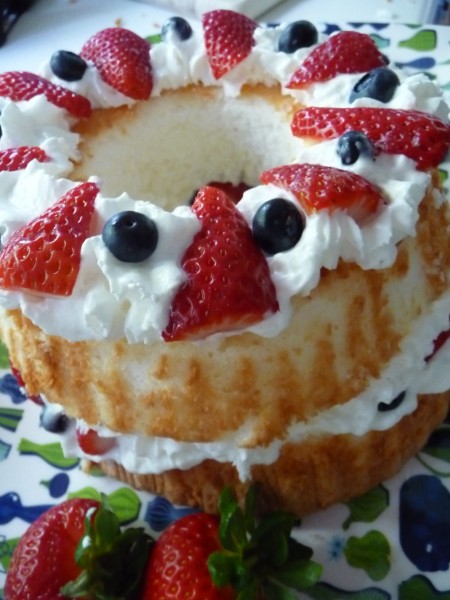 So what is your big cheat? Are you the person who stays up all night crafting mini whoopie pies (and is it worth it?)? Or are you the one who swaggers in with a bucket of KFC (and feels no guilt whatsoever?).

Is there a time and season for both? When do you cheat and when do you go for scratch?