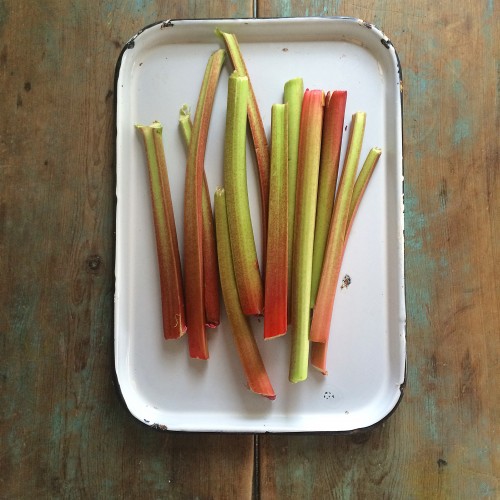 For me, the true harbinger of spring is not the appearance of daffodils or the sound of sneezing from allergy-sufferers (sorry if you’re one of those people afflicted by the dreaded tree pollen, it seems really awful this year); it’s when my neighbor Rita tells me her rhubarb is in. Rita is my plucky active-senior neighbor who has a phenomenal green thumb. Not only has she lived in the same house where she was born over 80 years ago, but she’s a master-sewer and quilter and grow things like she breathes. For someone like myself, who has absolutely no instinct for keeping things alive that are put in the ground, having Rita next door is a Godsend. 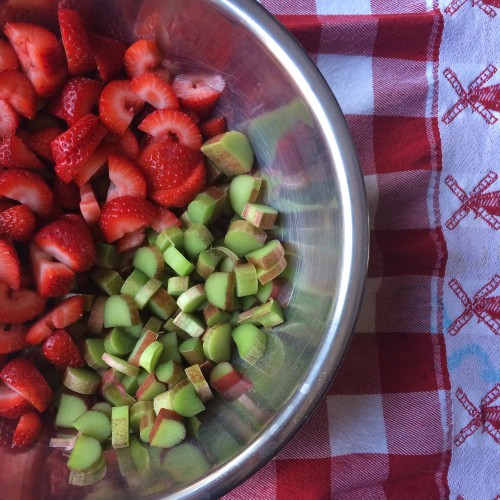 In exchange for my weekly supply of stalk-which grows lushly in several thickets in her backyardâ€”I supply Rita with a portion of whatever dish I’ve made with the rhubarb, which is normally a strawberry-rhubarb crisp. For the rhubarb skeptic-and apparently there are several of you out thereâ€”I highly recommend you start with a crisp, which my family eats for breakfast, dessert, and after-school snack (Belle has also been known to eat crisp for dinner). The recipe (see the bottom of this post) is flexible and fun to make because it allows you to be a bit creative. It’s also a good one to do with kids because you don’t have to be a control-freak about measurements. Another recommendation for a crowd-pleasing rhubarb recipe is this Strawberry-Rhubarb Coffee Cake (rhubarb and coffee cake combined, how can it not be next-level good?) shared by my friend Jessica from an old issue of Martha Stewart Living.Â  HERE’S a link. 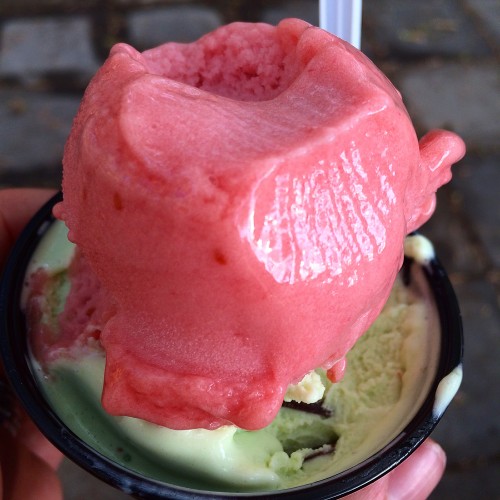 Then there’s this rhubarb ice cream I had the other day at my favorite ice cream place, The Bent Spoon in Princeton, that was so pretty and flavorful that I want to try and make it at home. I’m going to try this Nigella Lawson recipe to start because it seems simple and purely rhubarb. HERE’S a link.

I feel like the Brits have a better touch with rhubarb than we Yankees doâ€”perhaps because of their affinity for gardening and fruit desserts like fools and jam-so my other go-to guide for using rhubarb is the wonderful English food writer Nigel Slater and his cookbook Ripe: A Cook in the Orchard. Not only does he provide a slew of rhubarb recipes, but he goes in-depth about varieties (apparently there are over 1oo), as well as the history (it’s also known as “the pie plant”), and what ingredients it pairs well with, including: honey, vanilla, ginger, yogurt, almonds, pork roasts and the less obvious ones like mackerel and salmon. 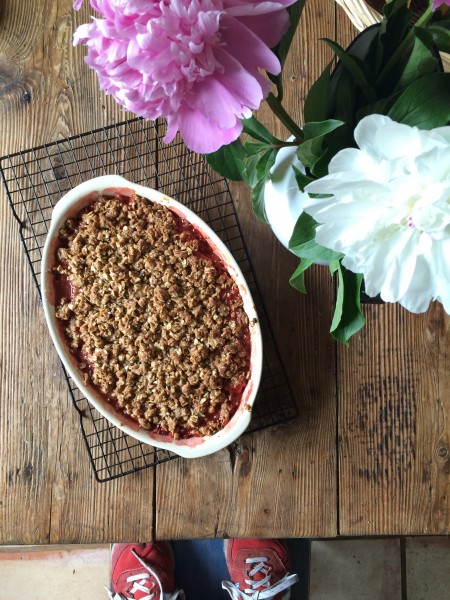 Lately, I’ve been tempted to make more savory and cocktail rhubarb dishes, which I’ve been seeing with more frequency in new cookbooks and magazines, including:

–Roast Chicken with Rhubarb Butter and Asparagus in the May issue of Bon Appetit.

But at the end of the day, I’m pretty tied to my crisp recipe (I make at least one crisp a week when it’s in season). The crunchy oat-nut-cinnamon crumble topping, the warm mingling of sweet strawberries and tart rhubarb underneath, just cannot be beat.

Preheat your oven to 375 degrees and butter a baking dish (I use an oval ceramic gratin dish, a Pyrex dish should work as well, I prefer not to make this in a metal dish).

In a bowl combine: 1 cup thick-cut rolled oats, 1/2 cup all-purpose flour, 1/2 cup alternative flour (I have used graham flour [my new favorite, Bob’s Red Mill makes a version], rye, almond, and whole wheat…all work well), 1/2 cup dark brown sugar, cinnamon (to taste, I like to add a lot) a little salt, and 1/4 cup of chopped nuts of your choice (I’ve used pecans, walnuts, almonds, and cashews). To the oat-flour mixture add 1/2 cup melted butter and then use your hands to make clumps. Place in the freezer while you prepare the fruit. In a large bowl I combine several sliced rhubarb stalks and 2 pints of quartered strawberries (about 3 pounds total) with 2 tbs of corn starch, a 1/2 cup sugar, some vanilla, and a little salt. Pour the fruit mixture into a buttered baking dish, top evenly with the crumble mix, then bake at 375 for 45 min (you might want to place a baking sheet covered with aluminum foil on the rack beneath the rack the crisp is on to catch any bubbling over). Let crisp cool for about 10 minutes before eating (it’s terrific warm but also at room temperature). ENJOY!