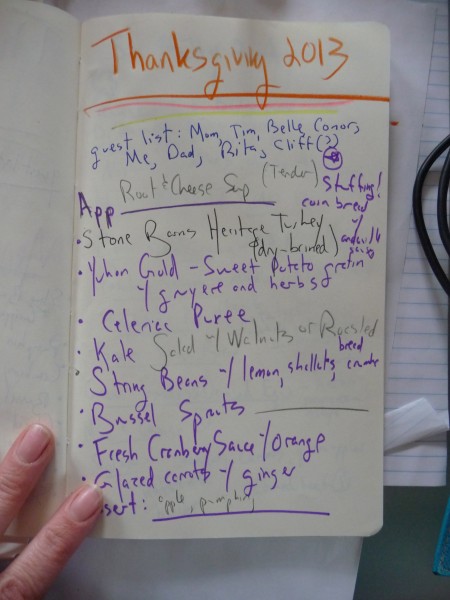 Today is the day when I try and finalize my Thanksgiving menu. It’s a multi-step process that results (hopefully) in the creation of a holiday dinner that combines old favorites with new dishes and happy experiments. This year I have the added challenge of incorporating produce from a special-edition, late-season share provided by my CSA. I’m picking it up this afternoon, here’s what’s on the list:

For the pumpkin I’m thinking soup rather than pie. My mom makes her pie with canned pumpkin puree and it suits us all fine.

For the turnips perhaps braising them or tossing with a warm vinaigrette.

For the mustard greens I’m thinking of making a Bon Appetit recipe that uses them in a gratin…although my yukon gold-sweet potato gratin is an annual favorite so not sure I want to swap one for the other.

The celeriac is definitely going to become a puree.

The carrots I’m going to glaze with some ginger and honey.

Then the next step is looking at what I made last year as a reminder of what I might want to repeat or never make again. 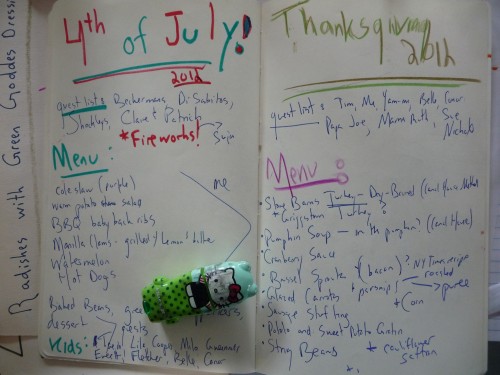 I keep all of my holiday meal plans in a plain notebook so I can refer to them just for this reason. I also put the guest list up top or else I might never remember from one year to the next who I was feeding. The one Thanksgiving dish that I haven’t quite settled on from year to year is the stuffing. I didn’t grow up eating stuffing (my dad is very anti-stuffing for some reason, but that’s one of the pluses of growing-up and hosting your own Thanksgiving dinner, you can make whatever you want) and the first time I ever made the stuff it was a box of Stove Top in my twenties for my then boyfriend/now-husband. I mistakenly quadrupled the amount of butter in the recipe and that made it quite good. Perhaps that’s why he married me?

One year I made the Big Sur Bakery Cookbook’s mushroom stuffing, and I’ve made plenty of traditional sausage, oyster, and chestnut versions. This year I think I’m revisiting a cornbread and andouille sausage stuffing that I don’t think I got quite right the first time around, but it has so much potential. It’s a little extra-work because you’re supposed to make the cornbread from scratch, but I’m going to do that the night before. 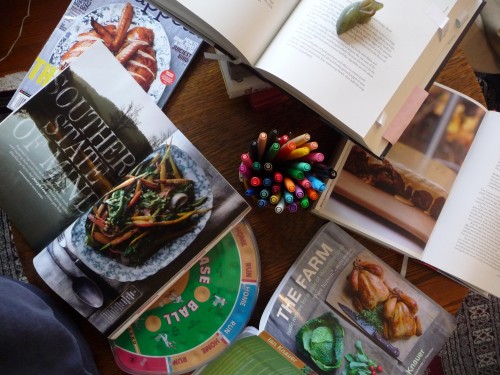 Once I’ve picked which regular dishes will be on the menu, I pull out dog-eared cookbooks and my old Thanksgiving issues of favorite food magazines, and decide which new dishes I want to give a whirl. I love all of Nigel Slater’s cookbooks and I think his autumn-winter dishes are particularly good. He has a recipe for a rich root and cheese soup for a winter’s day which looks tempting buy maybe too rich, and a walnut, chocolate, and honey tart that I’ve been dying to try, but might save for Christmas. Since I’ll have mustard greens from the farm, I’m thinking of trying a recipe for mustardy mustard greens from Ian Knauer’s cookbook The Farm. I also like the sound of a turnips with bacon and pickled mustard seeds from last year’s Thanksgiving issue of Bon Appetit. 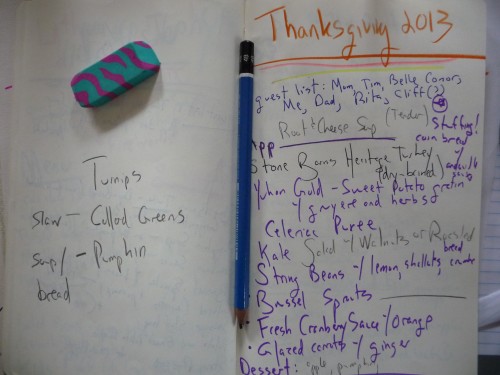 Once I’ve got it all chicken-scratched into the notebook, I’ll ponder and sleep on it, making the final call on Wednesday night when the cooking actually begins. Invariably I’ll make too many sides, but that’s really the best part of the meal, right? And who doesn’t like a leftovers-plate piled high with lots of veggies (not including the turkey/mayo/cranberry sandwich that gets eaten only a couple of hours after the actual meal was consumed)?

I hope you’re enjoying the planning of your meal as much (possibly more) than the cooking. I know we’re all very thankful to have such abundance and that we get to share it with those we love.