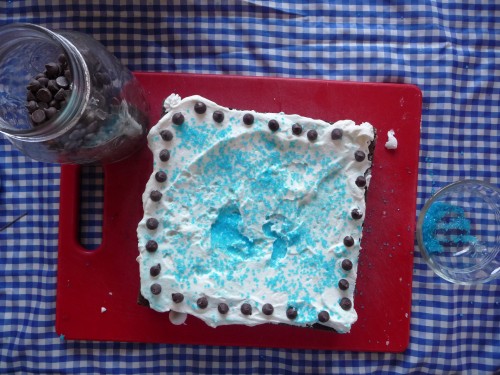 As you long-time readers may recall, every year on my son Conor’s birthday, I make him a birthday cake from scratch. Some of you are probably thinking, “big whoop”, right? “I can make scratch-birthday cakes while grooming the dog and organizing the junk drawer.” Well yes, for the baking-gifted this really is no biggie, but for me it really is something because first, my baking skills are extremely limited: My repertoire is short and sweet (haha!) and includes the following: Chocolate chip cookies, brownies, a “perfect” lemon tart that is indeed perfect, fruit crisps and crumbles, a very basic vanilla sheet cake, a messy but formidable apple crostata, and banana cupcakes with cream cheese frosting.

Second, the other issue here is that when Conor turned two, he asked me (with somehow only a rudimentary vocabulary) to make hims a birthday truck cake. Meaning, a birthday cake in the form of some kind of truck. Just so we’re clear, he didn’t mean a cake with a truck drawn on it. No. He meant cake that was a 3-dimensional truck. I could have just bought a fondant monstrosity and called it a day. But I loathe fondant (sugar paste). And something about my little boy’s request just felt personal. Like I should be the one to do it.

Ever since that first challengeâ€”chronicled HERE…my gosh I’ve been writing this blog for a long timeâ€”all of Conor’s cakes (he’s now 7) have had to follow the theme of cake, truck, vehicle of some kind (but never a moped because they’re too hard). Why I still continue to do this to myself when baking cakes seriously stress me out, I don’t know. Someone (my husband) suggests it’s some sort of mama’s-boy syndrome. Whatever. I’ll probably be making Conor a hovercraft cake when he turns 2o, and that’s just what I’ve gotten myself into. But this year I found myself a loophole… 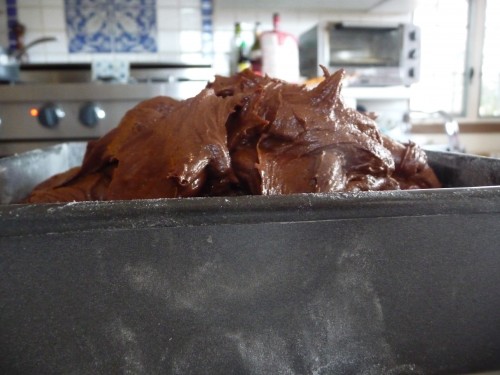 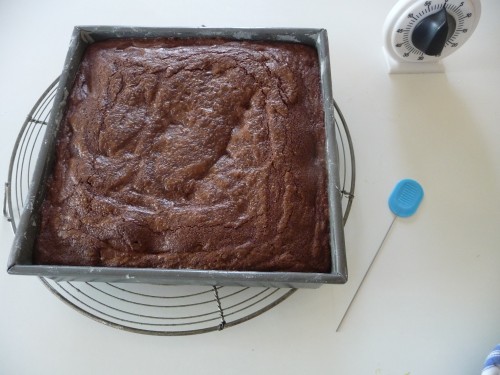 I decided that I would ask Conor to make the cake for his family party. Give myself a break and have him take over the chore of decorating. I can’t say he totally went for itâ€”his backyard party with buddies and classmates is in a couple of days and I thought I heard him say something that sounded like “can you make a cake that looks a quad?” But I’ll cross that frosting bridge when I get to it. For Conor’s first annual DIY cake, I used my favorite all-time brownie recipe from Thomas Keller’s cookbook Ad Hoc At Homeâ€”HERE is the recipeâ€”and rather than cut it into squares, just converted it into a chocolate cake. I then whipped fresh cream for the frosting and set out the rest of the edible decorations for Conor to have at it: A bowl of blue sprinkles, a bowl of chocolate chips, icing, and the cream. 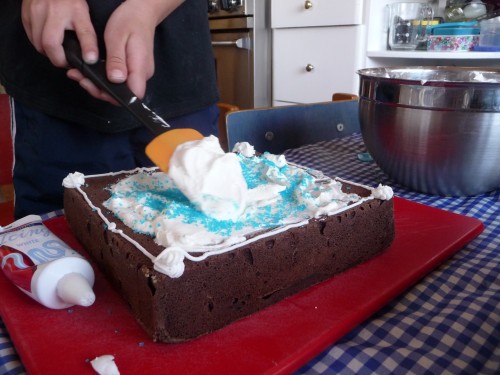 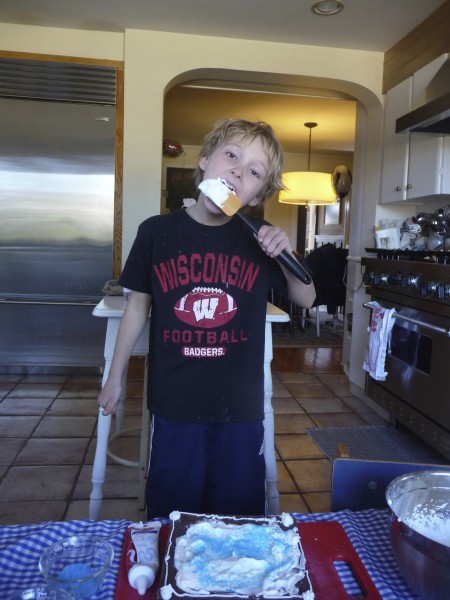 The most important thing about this project is not to micromanage. If you find yourself hovering and art directing your kid’s birthday cake then that takes away the fun they’re having and you’re actually doing the decorating and then what’s the point? You can still “manage” by limiting the decorations (if you choose to give your kid a bag of gummy bears and 10 different colored tubes of icing then the outcome is on you) and by not expecting a child younger than the age of 3 to do this without a collosall mess. 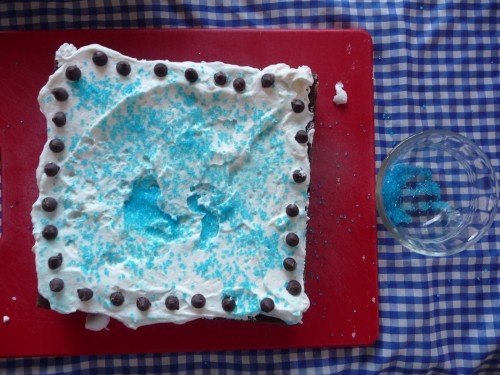 But if you just go with it then the results can be quite niceâ€”see above–simple and homespun and maybe you even buy some time before you have to start on that moped cake.