5 Things That Make Any Pancake (or Waffle) Better 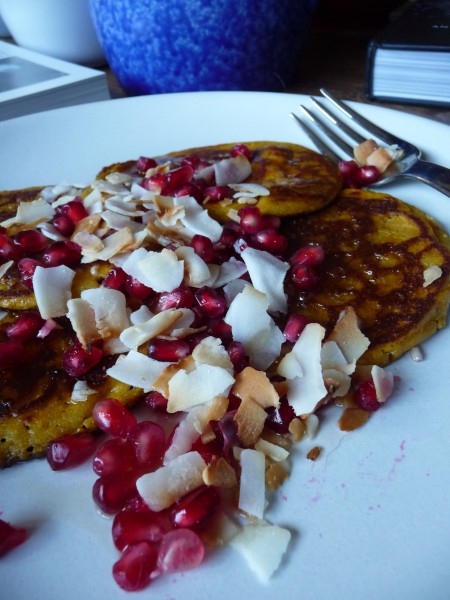 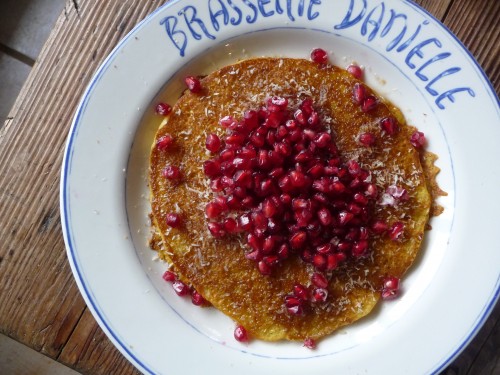 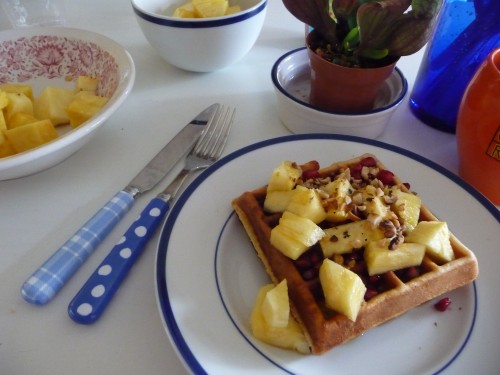 I’ve always enjoyed making pancakes, which is strange because I don’t consider myself much of a baker and pancakes are more of a baking-type chore (measuring cups, mixing bowls, the chemistry of gluten meeting butter, sugar, and eggs). Perhaps it’s because you can be creative with a pancake recipe, go off-script if you’d like, but they’re not nearly as temperamental as a cake. Case in point: As soon as canned pumpkin becomes available, I stock up and start adding it to my pancake batter. Maybe I should measure it out, but I don’t (although I will tell you not to go too crazy…I added a whole cup once to Marion Cunningham’s recipe for buttermilk pancakes and the resulting flapjacks were logy and lethargic in their density).

Besides canned pumpkin puree, here are the other ingredients which I love to shower atop my family’s weekend pancakes or waffles, particularly this time of year. The waffles above were actually for Belle’s first-ever-slumber-party breakfast and were devoured by seven ravenous and very wired 10-year-olds.Â  If you have a slumber party in your future (God help you), I think it’s much easier to crank out breakfast-to-order on a waffle machine, rather than pancakes, because you don’t have to dirty a skillet or griddle or deal with the stove.

Lately, I’ve been having a bit of a love affair with shredded coconut and pomegranate seed-adding them to curries, grains and kale salad-so I’ve had both kicking around my kitchen, which is what inspired me to add them to the pancakes one morning. Side Note: It’s so true that removing your ingredients from their packaging and decanting them into jars or clear containers kept on your counter or kitchen shelves, where they can be readily seen, will inspire you to use them more).

The pomegranate I remove using the spanking method, and any extra seeds I keep in a jar in the fridge. The coconut I lightly toast first in a skillet and then store in a mason jar on my counter. The toasting is kind of key here, providing a similar effect as when you toast nuts or whole spices, releasing more flavor and that intoxicating aroma (I recently had a mom friend tell me that the best tip she got from KEEPERS was to toast nuts before using them, “I put them on everything now!”).Â  I prefer the wider/thicker grated unsweetened coconut, but if I can only find the finely shaved then I will use that instead.

Adding both the tart and crunchy pomegranate seeds, as well as the sweet and nutty coconut, to the top of a pancake, is enough to make me feel like I’m eating breakfast at an exclusive log cabin resort somewhere in the Adirondacks. I also like to add a squeeze of lemon or lime juice with the maple syrup to let it all mingle together.Â  Include another layer of toasted and chopped walnuts or pecans and you’re taking it all to a wonderful new level. By including these healthful ingredient-pumpkin puree to the batter, toasted coconut and nuts, fresh pomegranate seed-it’s like you’re counteracting the fact that you’re filling your belly with pancakes. Kind of.

So what do you like to put on you flapjacks?