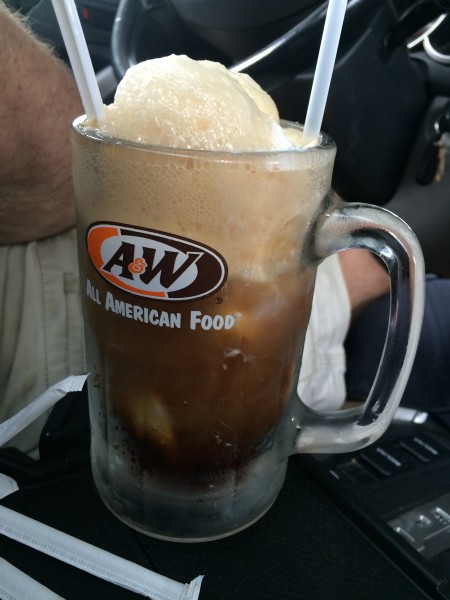 Last weekend, we took a family road trip to drop my daughter off for her very first summer at sleepover camp. It was a fun, mixed-emotions journey: A little nostalgia because the camp is located near me and Tim’s old college of Middlebury (where the dinner menu used to regularly feature a dish called “Butt Steak”, but now has an organic cafeteria…what the heck?), combined with excitement at the adventure Belle was about to have, a sliver of nervousness, and just a bit of sadness at the looming goodbyes. Belle’s camp is old-school, meaning all communication is via snail mail. I love that she is in an environment that’s a digital no-go-zone (I wrote a four page letter the other day, complete with doodles, I can’t remember the last time I did this!), but it also means that I’m wondering pretty much every second of the day, “What is she doing right now!?”. Clearly this summer of virtual and actual separation is good for both of us, so I’m doing my best to embrace the independence and a return to old-fashioned communication. To help ease the transition, we hit a lot of our new and old favorite food stops in Vermont, which, if you didn’t already know, is a terrific food state. 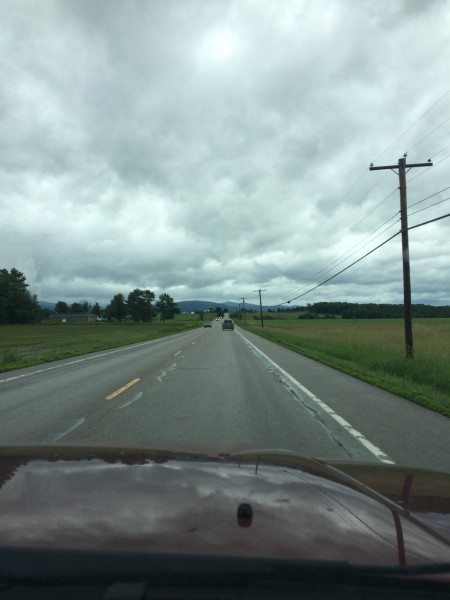 First up was lunch at American Flatbread, which isÂ  located beside the Otter Creek River in area called The Marbleworks. There are now several of these boho-hippie establishment-where pizza-like flatbreads are baked in an enormous wood-burning hearth and topped with local cheese, vegetables, and meatâ€”but the original was in Middlebury, and it’s founder based it on the communal ovens found in rural Quebec, before spawning a mini-frozen pizza empire. I had the special vegetarian flatbread, topped with roasted zucchini and mushrooms…and then said “what the heck?” and asked for local bacon on top. I mean..I’m worth it, right? 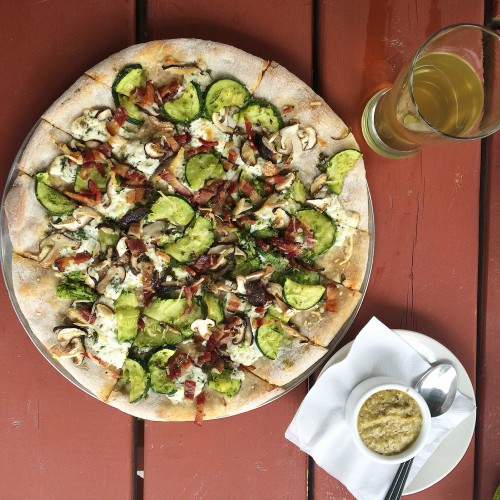 I have been a lover of hard cider since I could legally imbibe. In Belgium, my family regularly served a dry hard cider along with Sunday lunch, and as a college student I was introduced to the deliciousness of local cidermaker Woodchuck (which has also since grown into a mini-empire). I tried a new one to go along with my lunch that was a fantastic ginger-infused, medium sweet blend from Burlington based Citizen Cider called The Dirty Mayor. I have no idea what that name means but it was a delight. 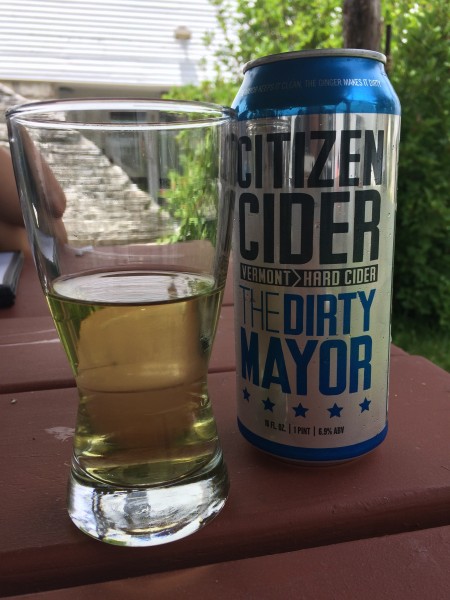 Across the way from the restaurant was a beautiful Asian tea shop that was new from my last visit. If a place can have a calming, Zen, Feng-Shui vibe, then this sun-soaked nook had it… 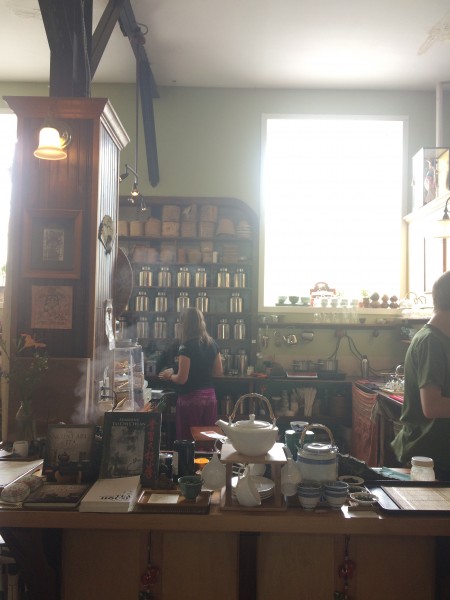 The student working behind the counter gave us a little demo of the tea preparation, which I’ve always loved because of the combination of numerous steps, vessels, pots, and ceremony. When I asked about a collection of little icons that were placed on the slate counter where the tea was brewed, he told me they were “tea pets”. How have I never heard of such a thing? One of the pets was a Buddha and when he poured hot water on top of the Buddha’s head, he turned colors. Isn’t that charming? 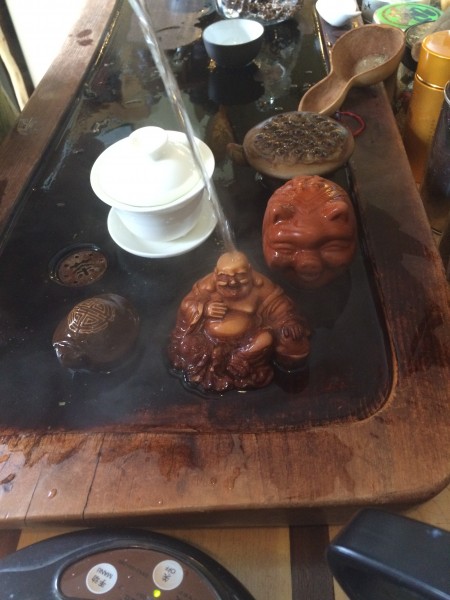 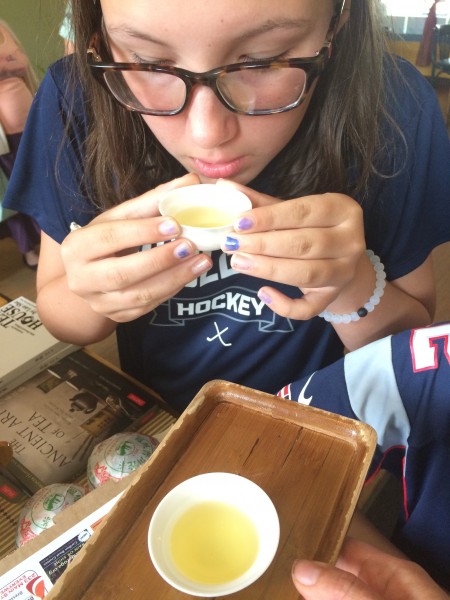 One of the other bonuses of bringing kids back to your college town is subjecting them to your old stomping grounds (“Look kids! This is the building where mommy directed her first black box production, a modern-feminist retelling of Shakespeare’s Othello…blah blah blah…”) and also your favorite places to eat. One such restaurant is called Fire & Ice, and it’s basically like the place where you parents brought you when they came for Parent’s Weekend. It boasts the largest salad bar in the entire state, and I don’t think that’s an exaggeration (there’s an actual boat in the middle of the salad bar and a block of cheddar the size of a small igloo under an enormous bell jar). But Conor and Belle’s favorite novelty item was the college-variety milk dispenser with unlimited chocolate milk. They did some damage here. 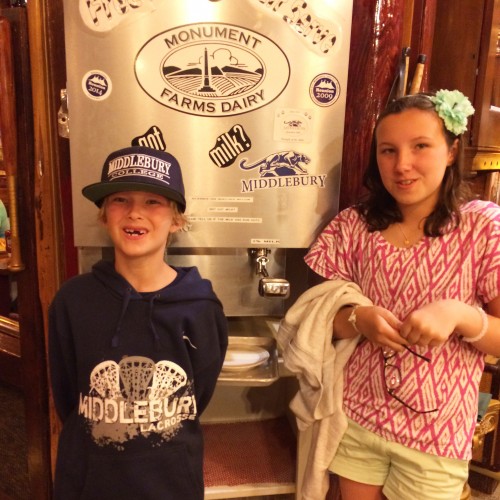 Our last meal together before the big drop-off on Sunday was at the truly special Vergennes Laundry, which is not in fact a laundry, but a bakery-cafe located inside of an old laundry building in the town of Vergennes, just a few miles north of Middlebury. This was my second visit, having first made a detour there during a skiing trip after readin a blog about the owner-couple on The Selby. You can read it HERE. 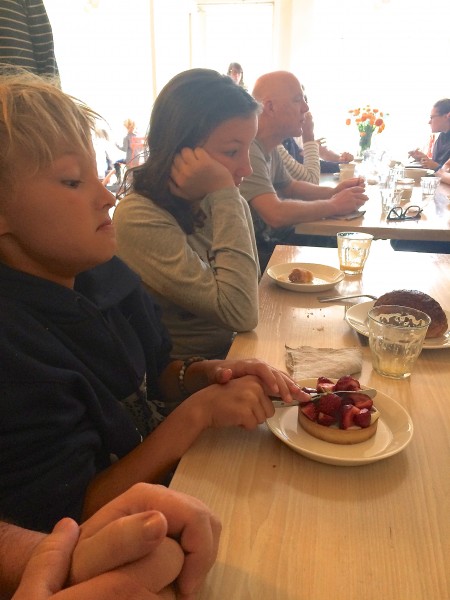 Now, this is an example of one of those stops where, a food writer/blogger needs to do some serious cajoling. When your family looks at you with weary eyes, communicating something along the lines of, “Really? Do we need to go to your Selby-artisianal-food find-and wait in line to eat a hipster-perfect pastry just so you can blog about it? Why can’t we just get an EggMcMuffin like the rest of the population?” Normally, I may feel a twinge of guilt, but in this case, I KNEW I was right, and there would be no griping once we had those perfect pastries in our mouths. 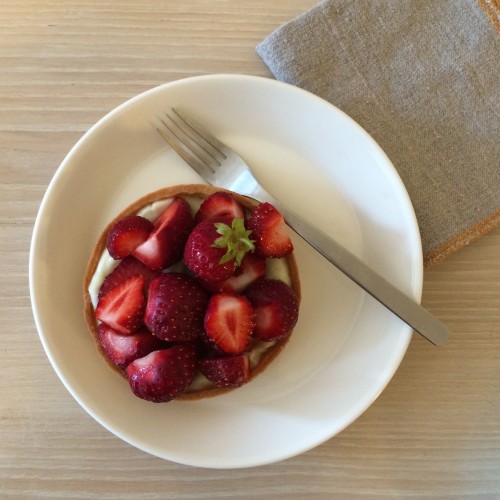 True to our mutual predictions there was a wait, amongst an assembly of Vermont-rustic-chic-hipster-beautiful families out of a Kinfolk magazine spread. But there was also wild strawberry tarts (see above); and homemade yogurt and granola topped with honey, strawberries and grapefruit;Â  warm chocolate croissants; and scones with a side of butter and the most flavorful homemade berry jam I’ve ever had. Oh, and the saucers of cafe latte… Let’s just say, the family griping didn’t last long. Mommy is always right. 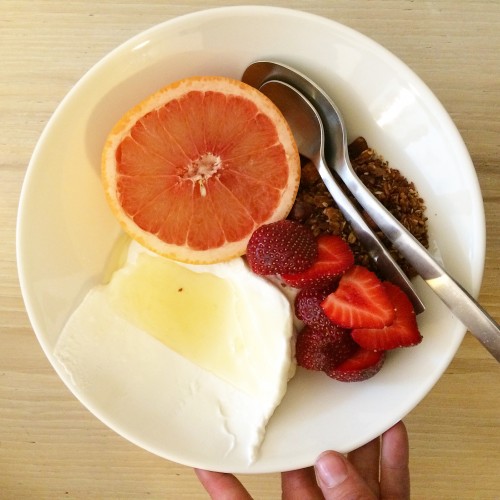 For the trip home I bought a box of one of my most favorite things, a confection you rarely find outside of Europe, called pate de fruit, which is basically a gummy bear, but square-shaped and made with real, concentrated, seasonal fruit. 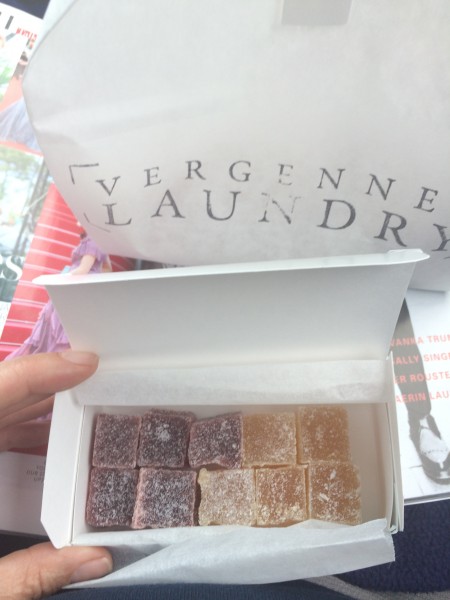 This is a box of strawberry and lemon pate de fruit…I ate it all on the car ride home. 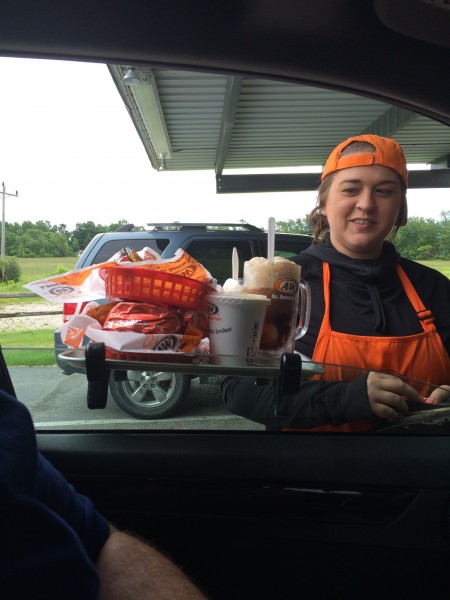 After dropping Belle off and saying our goodbyes (and being instructed by Belle not to cry…so I held it together), our last stop was from back in our college days, an A&W drive thru that’s only open during the summer months. You order from your car, and a tray laden with onion rings, hot dogs, burgers, and root beer floats is then hinged to your car window. Magic.

And then it was back home. Eating fruit squares, listening to a classic rock station out of Manchester, New Hampshire, and wondering about my girl and all the adventures that lay ahead of her. 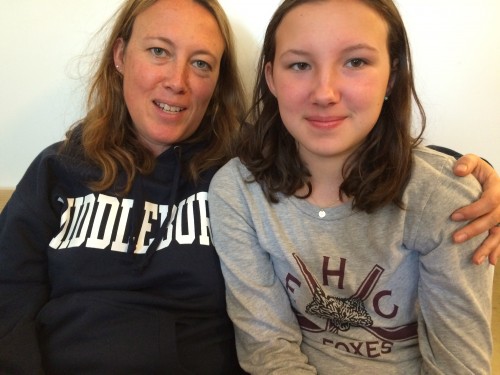 Me and Belle. XOXO